MY HOUSE, IN THE MIDDLE OF MY STREET ….

At one time, West Street was known as Chapel Lane, as it led to the town cemetery chapel, with its separate areas for the established church worshippers and dissenters.
Until the late 1800s, West Street was a leafy lane, with just a few buildings.  Most of these are still standing: the Zion Chapel, built around 1810, which was the first independent church in the town, two 18th century houses at numbers 78 and 80 (Grove House, which was at one time a school) and 109 on the other side of the road. 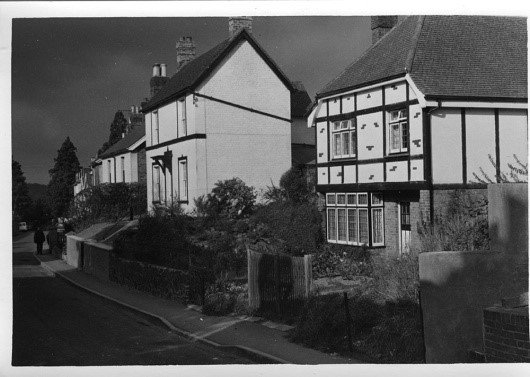 Following the arrival of the railway in 1855, there was a rapid expansion in residential building, mostly terraced houses for tradespeople, so that by 1891, the census recorded unbroken house numbers, from the Town down to Grove House on one side and number 109 on the other. By that time, too, the police station had been built at the top of the road, the Sussex Inn had opened as a beer house, and the Cricket Club had moved into a rented ground (now Pavilion Way).

Number 85 was built in 1865, part of Alma Terrace which runs from 77 to 87, possibly named after the battle of River Alma, the first important battle of the Crimean War.  The front doors were reached by steps which still exist, as do parts of the retaining garden walls, originally topped with rather grand iron railings.  A photograph from 1913 (below), shows these, looking up the road from similar houses built a little later, probably numbers 89 to 95.  No 78 is in the right hand foreground.

The houses had two small rooms and a back scullery downstairs, with two bedrooms upstairs, and a fireplace in every room except the smaller bedroom.  Mmm, luxury.  The land at the back was not fenced, being shared by all the houses.  A communal passageway between numbers 83 and 85 allowed access from the street.  There were outside lavatories, maybe not even one per house, as the only one known to have been unearthed was in the garden of 83.  The outside tap, again most likely shared, is in our garden, and still works.

People clearly made the best possible use of the available space, with censuses showing what we would regard as very overcrowded living.  In 1871, six years after it was built, our house was home to a lone woman with 7 sons aged between 2 and 18, whilst the occupants of the other four in the terrace included two lodgers each, as well as the family.

By 1911, things seemed to have got better, economically, with fewer residents per house.  Ours was home to Archibald and Hetty Hooker, he aged 29, a painter from Battersea, and she a local girl of 25.  We like to think of them being happy here in what was probably their first home.

Some time in the 1960s or 70s, by which time the previously rented houses had been sold off, the owner of our house, inexplicably, built a second little stair in front the house, not 6 feet from the existing steps shared with 83, as can be seen in the picture below.  It also shows the Alma Terrace plaque, and the communal passageway, which now belongs to 85, as our bedroom extends over the top.

Around this time, large scale demolition of West Street terraced housing began, first to provide the car park behind Queens Walk, then in the 1980’s for what is now Waitrose and the library.  The first of these is under way in the picture below, looking down the street from above where Queensway is now. 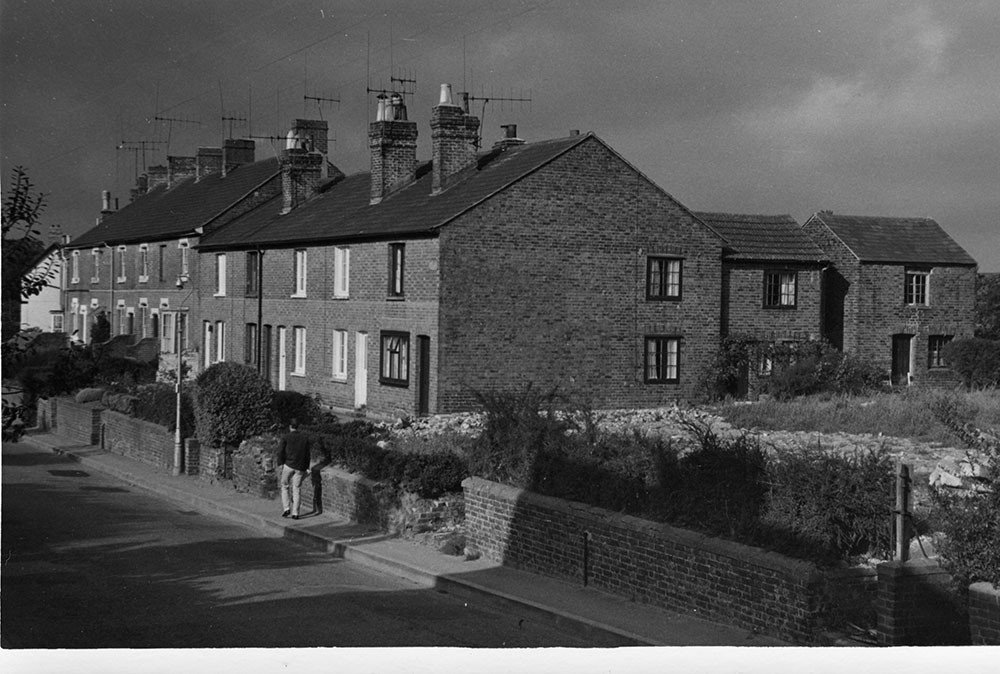 Despite all the changes, a person from 1865 would find much to recognise in our house and its immediate environs.  Legacies for us, from its origins, include a shared water supply, boundary disputes over the way the back gardens have been fenced (no written information exists) and the extant right of way along the back of the houses to the communal passageway (thankfully rarely used), as well as the superfluous front stair.  But we love this sturdy little house, and hope it will still be here in another 150  years.

Your ticket for the: MY HOUSE, IN THE MIDDLE OF MY STREET ….

MY HOUSE, IN THE MIDDLE OF MY STREET ….