May 8, 2020
No comments yet
East Grinstead town history, Local History

This month sees the 75th anniversary of the end of the Second World War in Europe. May 8th 1945, was the date on which the German army finally surrendered to the Allied forces. VE Day, stands for Victory in Europe. When the news was broadcast, people all over the country thronged the streets, singing and dancing. The celebrations lasted right through the night. Buckingham Palace was a focal point for citizens to gather, and the crowds stretched down the mall and past Admiralty Arch. It is said that, Princess Elizabeth, now of course, HM Queen Elizabeth II, slipped out of the palace unseen and mingled with the crowds.

Once the initial euphoria had passed, a more organised round of celebration began. Most towns and cities held street parties. In the more built-up areas, they were literally that, parties in the street. Roads were closed and neighbours worked together to bring tables and chairs out and pooled their meagre rations to provide food for the children, who were the focus of the rejoicing. In the suburbs and more rural locations the parties were held in parks and other green spaces.

To understand the level of rejoicing that the end of the war was in sight, you need to appreciate the strain of living through it. For adults, there was the constant fear of receiving a telegram announcing the death of a member of the armed forces. The juggling with the meagre rations allowed, supplemented by home grown vegetables and fruit. Some people kept chickens, fed on peelings and other scraps. Then there was the fear engendered by the planes and rockets overhead.

Although during the hostilities, children had been shielded as far as possible from the worst horrors of war, they were, never-the- less, affected to a lesser or greater degree. Many city children were evacuated on September 1st 1939, two days before war was actually declared, as the government feared that bombing would start immediately. In the event it did not, and the period of calm before the storm was labelled the Phoney War.

Women's Voluntary Service members standing on the quad at East Grinstead Grammar School before travelling to Llanelli Wales, with evacuees during the Second World War.

I have lived in the East Grinstead area for well over fifty years, but my roots lie in London. I am by tradition, a Cockney, having been born in a hospital within the sound of Bow bells. However, my pre-war home was in Tottenham, north London. I was five at the time and was sent, with the rest of my school, to Hertfordshire, carrying only a small bag with a toothbrush, comb and spare pants, and the regulation gas mask, in its own brown cardboard box. I had never been away from my parents before. I was placed with a very kind lady, who has a son about my age.

I awoke in the morning to see, on the chair beside my bed, not the pretty dress made by my mother, but a pair of shorts and a white shirt. My host explained that my dress had been stained on the journey. It had been washed, but was not yet dry. This was the final straw for me. Tired and homesick, I was now to suffer the indignity of being dressed as a boy. I fled into the garden and hid under a large bush and howled. This reaction would not be understood today as many women were trousers. They did not, then, and to this day I have never possessed a pair. My parents came and collected me after a few days. The Phoney war did not last for long and soon London and other cities were subjected to a bombarded by waves of German planes dropping bombs. I survived a direct hit on the house next door, we were in our Anderson shelter in the garden, along with our cat and dog. 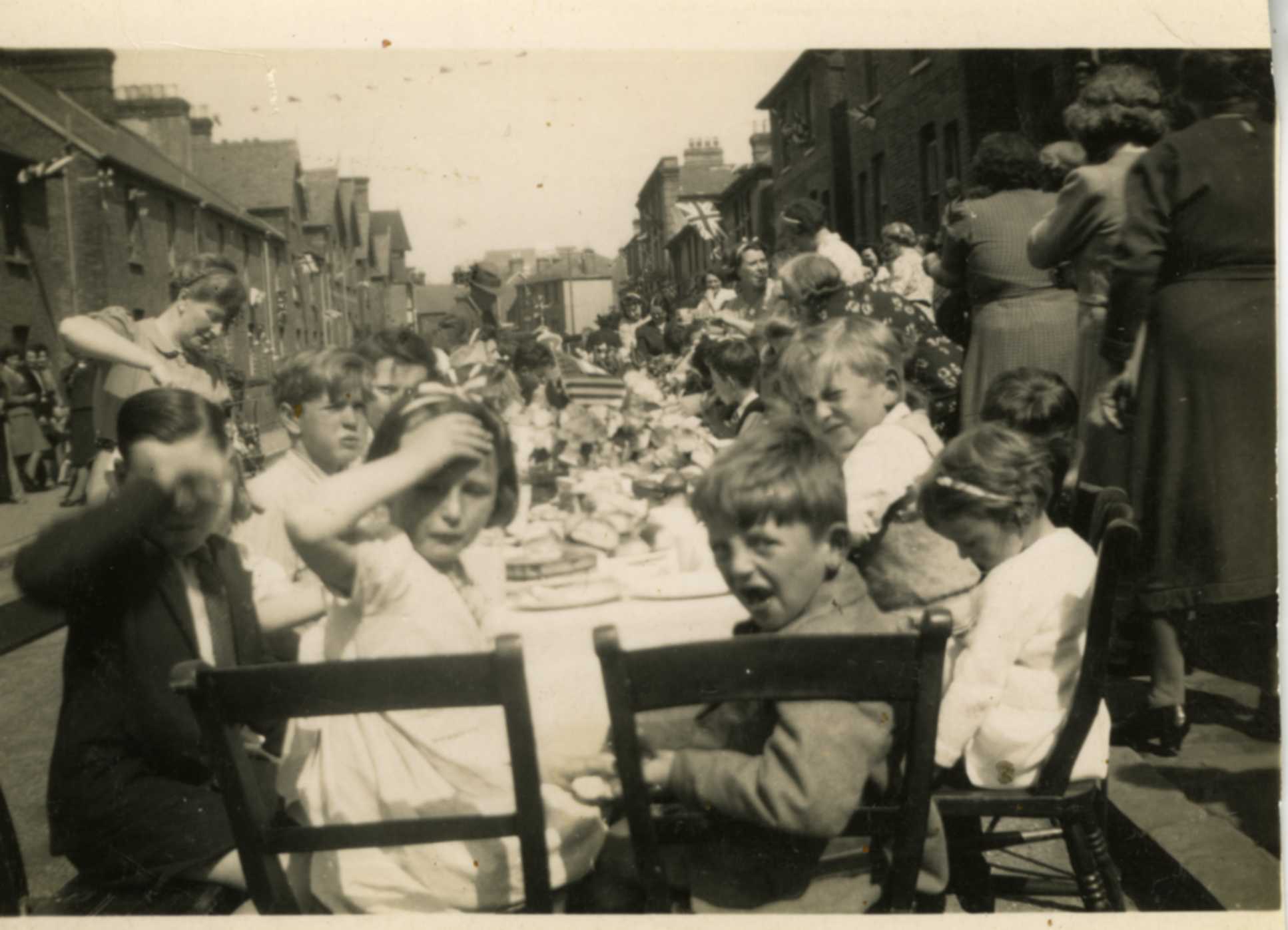 A photograph of a VE Day street party in Queen's Road, which was attended by about 50 local children.

The other lasting affect the evacuation had on me, is the dread of sleeping away from home. I hated going away on holiday. We invested in a caravan, my home-from home. If we did venture abroad, my husband was an enthusiastic traveller, I was in a state of despair for days beforehand. Once there, counted the days to our return. This feeling has diminished over the years, but I still not comfortable with staying away, even with close friends or relatives. These two concerns are mitigated by the good side to my wartime experiences. No-one in our circle of friends and relatives was killed.

Life went on, rationing was not stopped until almost ten years later, sweets being the last to be dropped. After the Blitz in 1940 and 1941, we also had to endure the rockets the V1 and V2.

The worst thing on VE Day, was that, amid the general relief that the war in Europe had ended, there were the families of those still engaged with Japanese in the Far East and Asia. It must have been an almost unendurable strain on them to see the world around them rejoicing, while their sons, brother and fathers were still facing disease and death on the other side of the world. Thankfully, they were to receive the news that that Japanese had at last, surrendered, and the end of the war came on August 15th 1945.

We are now in the grip of the worst situation that a global community has faced since the Second World War. We survived that disaster, we will survive this, at a cost. Keep safe and carry on!

Your ticket for the: Memories of VE Day