Sir Archibald McIndoe, the pioneering Plastic Surgeon had a brilliant team assisting him with his ground-breaking surgical methods. “The Immortal Trio” or the “Firm of Three” as they were called, consisted of Archibald McIndoe, Plastic surgeon, John Hunter, Anaesthetist and Jill Mullins, Theatre Sister. 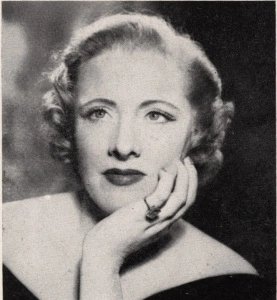 Jill was a slim attractive woman with red-gold hair with large green eyes and an infectious laugh. For many years a key member of McIndoe’s team, she first met McIndoe in 1931 when she was a theatre nurse at St Bartholomew’s Hospital in London. She assisted him and other surgeons with phenomenal efficiency and at 21 was in charge of one of the operating theatres at Bart’s.

In 1935, she joined McIndoe at his Harley Street practice and the highly skilled, successful team was formed of McIndoe, Hunter and Mullins. Their relationship, which lasted twenty-two years, was one of mutual respect. Jill was by no means the inferior partner in the team. To the surgeon, and he often admitted it, she was a second pair of hands.

When war broke out in 1939, Mullins accompanied McIndoe to East Grinstead to the Queen Victoria Hospital and worked alongside him reconstructing and treating the burnt and injured R.A.F. service men. Some of these patients formed a very effective support group and called themselves the Guinea Pig Club.  One such Guinea Pig, Bill Simpson, who was rebuilt by this magnificent trio, wrote;    “These three individuals are a perfect team and to watch them together in the theatre is to see a magnificent example of team work.” He described Jill as dressed (as ever) in green, slender and with red-gold hair and extremely neat hands which were perfect for needlework on grafts and excised scars and finishing off much of the surgeon’s work”. 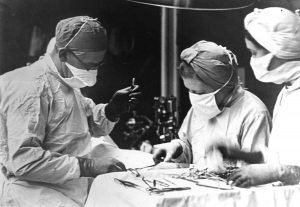 She was much loved by the patients and known for her great competence and efficiency as a theatre sister, her exceptional post-operative patient care – and for her perfect professional ‘chemistry’ with McIndoe. She had a great sense of humour and a strong personality that enabled her to cope with wayward Guinea Pigs with confidence.

She had a two-year relationship with one of the Guinea Pigs, Flying Officer Geoffrey Page and according to Page. “We had two years of great happiness together until I departed to fly in North Africa after leaving the hospital”.

McIndoe came to rely on Jill Mullins both in the operating theatre and in his personal life. Whilst his wife Adonia, was in America for three years, Jill Mullins and McIndoe grew closer in both their working and personal relationship. Outside the hospital, she regularly accompanied him to social events and often stayed with him at his house, Little Warren, where she also acted as hostess for dinners and drinks with selected Guinea Pigs.

Dutton Homestall, the Dewar’s country house was a popular place where Guinea Pigs spent time relaxing, enjoying meeting the locals and occasionally famous people. Clark Gable visited in 1942 and in the picture below, Jill Mullins is seated second left to Clark Gable, with McIndoe standing behind Clark Gable.

Her knowledge and understanding of surgery came to the fore when she took a leading role in designing the theatres for the new American Wing of the hospital, which opened in 1946, which filtered down to operating theatres elsewhere. She also had a hand in planning the layout of the wards giving every patient a view on to the gardens and ensured they were light, airy and soundless.

McIndoe’s wife Adonia and his two daughters, Adonia and Varona, returned to England in 1943 but the marriage deteriorated and the McIndoes separated in October 1946 but their divorce was not finalised until 1953. After the separation, McIndoe’s relationship with Jill Mullins moved on to an even more intimate plane and Jill began to move more and more into McIndoe’s life. She was a frequent visitor to Little Warren, especially when the children were on holiday and they were extremely fond of her. He bought her a cottage of her own and they went everywhere together, to the South of France for their holiday: to parties and plays, donning their evening dress when they had finished at the clinic.

However when McIndoe’s divorce was finalised it was not Jill he married but someone else, Mrs Constance Belchem, who he had met whilst travelling abroad. Their engagement was announced in 1954, Jill reacted badly to the news but she carried on working with McIndoe and eventually the two women formed a friendship based on mutual respect.

She continued to work alongside McIndoe and be his left hand, but things were not the same. McIndoe and Connie Belchem married in 1954 and Jill Mullins remained as his surgical assistant until 1957 when she left nursing to marry a South African businessperson and moved to Johannesburg. Jill Mullins returned to England in 1959 and had a happy stay with Constance and Archibald at their house in Sussex.

Whilst sailing back to Johannesburg in October 1959 she tragically died of a stroke aboard the ship, aged only 49. McIndoe was devastated by her death and praised her many remarkable qualities in a touching tribute in the Guinea Pig magazine.

He said; – “she was more than a friend, she had been his personal surgical assistant for 22 years and no one will equal her as a surgical assistant. To work with her was a pure joy and her post-operative care of her patients was equally outstanding. She radiated cheerfulness and efficiency, and during her 22 years thousands of patients passed through her care. We can be glad that she lived when she did. She was a real woman, and we will not see her like again.”

Your ticket for the: Sister Jill Mullins – Key Member of McIndoe’s surgical team